Toad Suck Creative is a brand new initiative, born right here in my hometown. It is meant to be a sort of conduit for local artists, giving them a chance to showcase their work, as well as helping the community build a much-needed nightlife. Project ConwayProject Conway fashion show takes place February 27 was their first event.

The show took place at The Brick Room, a downtown venue which turned out to be the perfect space. A big, open room with a high ceiling and exposed brick walls, it was an ideally neutral backdrop to the haute couture happening within.

One detail I especially liked was the draping along the ceiling with the lights. The airflow sort of rippled through the silky fabric, adding an almost luxurious element to the utilitarian atmosphere.

So there I found myself, in the front row of a small and very special fashion show.

There were two local designers displaying their clothes: Mac and Van. Both of them are in their early 20s—Mac just finishing up college and Van fresh out of college—and they both made each of their outfits by hand. Fashion design is a seriously challenging art form, and it was incredibly exciting to see the results of their ambition and hard work.

The first lineup was by Mac.

Five outfits in total. All of them unique, interesting, and vibrant with the designer’s authenticity.

Six outfits if you count what she designed for herself.

Next was Van’s lineup.

Seven outfits altogether, and with a completely different vibe from the first lineup. But perfectly equal in excellence. 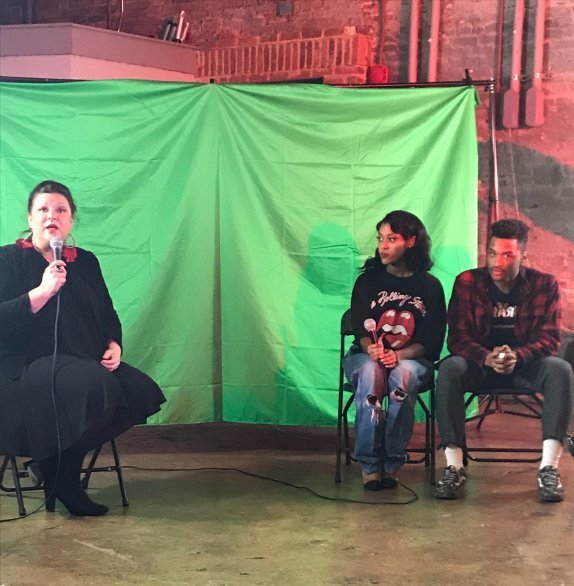 After the fashion show, the designers spent a few minutes in a Q&A, and I luckily had a question prepared. I asked, “What does 1920s fashion mean to you, and what is your vision for bringing that forward into the 2020s?”

They each gave their answers, which I took some shorthand notes on at the time, but be aware that I will be paraphrasing what they said, and not directly quoting them.

Mac: The 1920s, that style, isn’t really my style, but I feel very comfortable in the 2020s. I love repurposing clothes, and that’s a big trend right now. For me, it’s about originality, authenticity; two of my grandmothers were seamstresses, and that was very inspiring. I love making something from nothing. That denim outfit that Taylor (model) wore, I made that from four pairs of jeans.

She went on to say that being open-minded, being around people and working with people who aren’t like you, that’s what makes events like this possible. And she’s absolutely right.

I was very impressed with the skill and the professionalism of these two young artists, and I am totally convinced that they have what it takes to make it in the fashion industry.

I have a blog called The Makings of a Queen, and if you’ve read any of my posts lately, you know that I am all about the idea of modernizing the Roaring 20s, bringing fashion into what I call the Screaming 20s. My reasoning behind the word screaming is that it perfectly captures the sense of urgency—panic even—that tends to underscore today’s up-and-coming generations.

(I’m just hoping that if I say Screaming 20s enough, it’ll catch on).

My personal vision for bringing the 1920s forward has a lot to do with adding details from that era to modern clothing, such as a pearl necklace or red lipstick to an otherwise typical look. I’ve also discussed the “flapper girl” attitude, and bringing that vivacious sense of Feminism into 2020. But something I quite appreciated about this show was that the designers each had entirely different visions and inspirations for the future. Their ideas looked nothing like my ideas, and that’s just as it should be.

Style is about personal expression. If we didn’t have different tastes, clothing would just be the boring coverings on our bodies, and fashion design wouldn’t be the amazing art form that it is.

Special thanks to Fernando (@stepdaddynando), the gentleman in the white jacket, for being the evening’s master of ceremonies. And to Robert (@robtadodactylsaurus_rex), in the blue jacket, for founding Toad Suck Creative and bringing this all together—and for inviting me to write about it.

This opportunity was the closest I ever expect to get to New York Fashion Week, so that is how I treated it. Essentially, I spent the evening secretly pretending that I was some high-profile fashion journalist attending a Dior show. And just between us…I felt extremely cool.

This, for me, it felt like I was leveling up. I’ve been a fashion blogger for a little over a year now, but it was always just for me, writing for my own personal satisfaction. This was my first event, my first step into the tangible world of the fashion community. And whatever that may lead to, the best part was that I got to have this experience. It was the most fun I’ve had in quite a while, and it brought all of my passion burning to the surface again—I enjoyed writing about it almost as much as I enjoyed the show itself.

Congratulations to Mac and Van, and to Toad Suck Creative. I wish you all the success in the world.