You don’t have to be much of a basketball or sports fan to grasp this concept — “Ball Don’t Lie.” This phrase has become somewhat of a cliche in the basketball world, said after a foul is committed by a player. After the player who was fouled misses their free throw attempt, the player who’s charged with this foul, disbelieving their infraction, will shout for all in earshot, BALL DON’T LIE!!! (Google Rasheed Wallace)

This action is to reference the fact that if the foul called was legit, then the ball would’ve gone through the basket. The same could be shouted for any budding entrepreneur. The dice don’t lie.

The risk is not only in the uncertainty of the outcome after rolling them, but there’s also some risk in your response to that very same outcome. See, this isn’t just about mitigating risks like that of an insurance adjuster or even a parent to a teenage driver. Nor is it about risking it all because the latest entrepreneurial guru said so via social media. What it rolls out to be is getting better at responding to the outcome of each chance taken as a new entrepreneur.

These changes, or risks, won’t always result in something favorable. But then again, you knew that already.

However, the dice don’t lie. Therefore, responding to the outcome, favorable or not, will be about something bigger than what’s immediately in front of you. The chances you’ll take will have lessons attached, winnable wins for inspiration, and a timekeeper for you to monitor growing pains.

The etymology, or origin, of risk, comes from risque, meaning to “run into danger.” Let’s think about that for a minute when it comes to starting something from scratch. Many early entrepreneurs believe that the most risk will be financially related. Although that may be very true, there’s even more unexpected risk attached to self-discovery as an entrepreneur.

Regardless of the reason why people decide to start off on their own, one can hardly ever anticipate the amount of mettle needed to withstand setback after setback after letdown. Sure, there’ll be tons of advice from those who’ve experienced it before. There’ll be quotes, quips and catchphrases to take a gander at periodically for perspective.

Yet, no one, absolutely no one, will be able to identify the level of intestinal fortitude you have to continue the journey. That’s awfully risky to challenge one’s spirit and personality, but that’s also where the lesson lives. These are the moments when clarity of your mission may need to be revised.

I heard successful rapper/actor Will Smith speak recently about the potential lonesomeness with living out your dream. There’s some real validity to the concept of trying to explain your dream of being an entrepreneur to others. Another risky act because no one will be able to buy in, to your dream, to the fullest extent as you’d like them to. Roll those dice. Receive the lessons about yourself, others around you, and your mission.

Even when there’s a recognizable amount of dignity attached to the loss. What makes rolling the dice bearable is when you get better at identifying a winnable win. This is yet another risky task. Simply because many new entrepreneurs want all leaps of faith to be mega wins for their brand.

While most of the blame can go towards social media manipulation, a win can look differently per situation, per entrepreneur. So let’s revisit those dice.

There will be times in which an expectation wasn’t met and the outcome may very well seem like a significant loss. However, successful entrepreneurs are persistent ones.

For example, roll the dice by going after that big account with the more established brands. You may not win it, but you’ll definitely learn about a process or what your business is lacking — a winnable win. This elasticity, or bounce back attitude, can improve any entrepreneur’s ability to identify the next winnable win and the next, and so on. Soon, some unexpected wins may come your way.

The dice don’t lie, even when they bite.

I heard the very successful comedian, Jerry Seinfeld, speak to an up and coming comedian about longevity in the comedy business (listening to those who do it best is a habit, I know). He asked the newbie, “So how long have you been doing comedy?” The new comic replied, “Oh, about 5 years or so.” The shrewd veteran then said, “Ah. Well, you’re just a toddler starting school. This is how you’ve got to treat the stand-up comedy game.

How ever many years you’ve been doing it professionally, that’s your age. Now is your time to take risks, make mistakes, learn from the adults around you and get ready to act your comedy age.”

I took this as some great advice for new entrepreneurs as well. Not only will there be peaks and valleys along the journey, but the growth cycle is relative to the years of experience. Too much too soon could be a cause for concern, like that of a toddler. As a ten-year-old, you may have to roll the dice, even more, to prepare yourself for those trying “entrepreneurial teenage years.”

The growth of any entrepreneur is steeped in how you read the faces of the dice. They won’t show the same favor for everyone. Nonetheless, they do not lie. 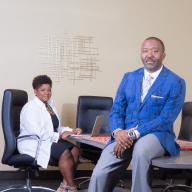 Dr. Candice Dowd Barnes is an Executive Coach and Chief Operations Officer for Parker Education & Development, LLC. She is a prominent speaker and accomplished author of multiple publications. She is the co-author of Civility, Compassion and Courage in Schools Today: Strategies for Implementing in K-12 Classrooms and Success Favors Well-prepared Adults: Developing Routines and Relationships to Improve School Culture.

As an Executive Coach and CEO of Parker Education & Development, LLC, Todd Scott Parker distinguishes himself through his ability to deliver coaching and training in a dynamic way to various educational and business audiences. His work is both unique and creative. He blends evidenced-based strategies, techniques, and methods from education and business to help schools, small businesses, and other organizations to create sustainable models of success.